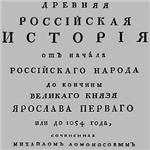 This book is only the first part of a vastly conceived "Russian history", which Lomonosov only managed to write, or only one part survived. He began work on this research in 1751 and continued until his premature death in 1764, when the final version of the first volume (though without the promised notes to it) was handed over to the printing house. The work was published after the death of the great enlightener in 1766.